Impacts analyses can be conducted with any available Accounts in the dropdown list, and the Impacts Analysis feature operates identically for national and regional accounts. The impact analysis feature can be accessed from the Analysis > Impacts menu item or from the Ribbon. 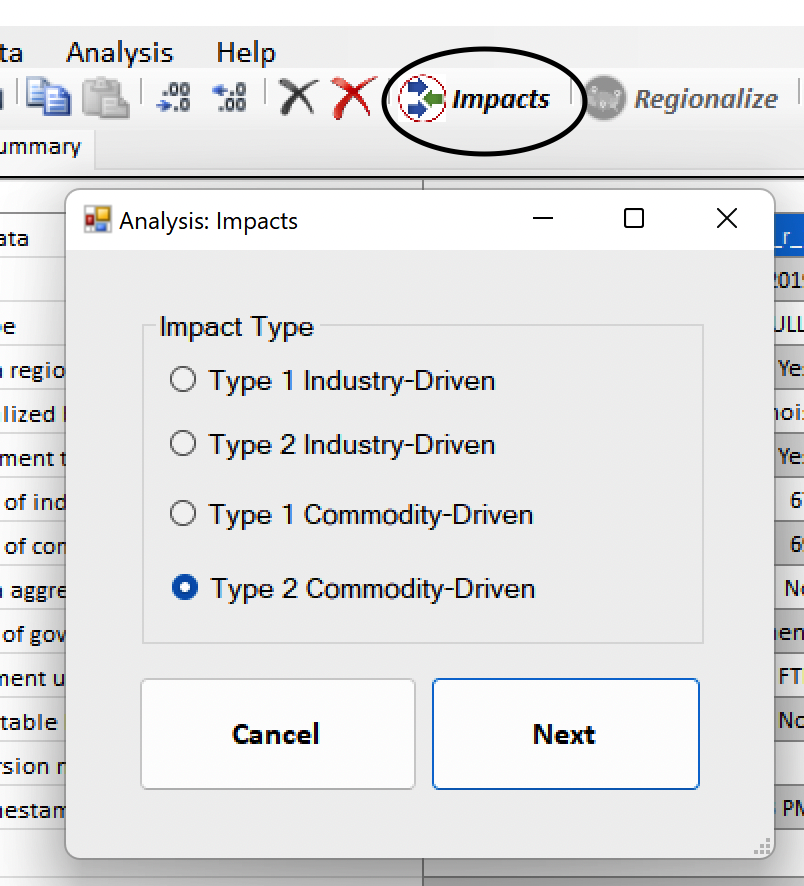 Type I models quantify the direct and indirect impacts on the region from changes in final demand, while Type II models add income-induced impacts to the estimates. Impacts estimates can be driven by changes in final demand specified by industry or by commodity. The nature of the impacts estimate will dictate whether industry or commodity final demands should be selected, and the selection will, in turn, result in a model designed to respond to industry- or commodity-specific demand changes (shocks). Any good input-output modeling reference will provide background on the nature of production, including the recognition that most industries produce not only primary but also secondary products and the various commodity-by-industry model formulations that accommodate this recognition.

Examples of industry driven final demand impacts would include the expansion or reduction in the scale of operations of an existing production facility. One way to model the impacts of a change in activity levels in an industry is to specify the change in industry output as a change in final demand for the primary and secondary commodities produced by that industry. However, for scenarios where we know specifically which commodities will face increasing or declining demand, we would use commodity-driven impacts models. Examples here include the impacts of tourism expenditures on the region, or changes in export demand for a specific commodity. 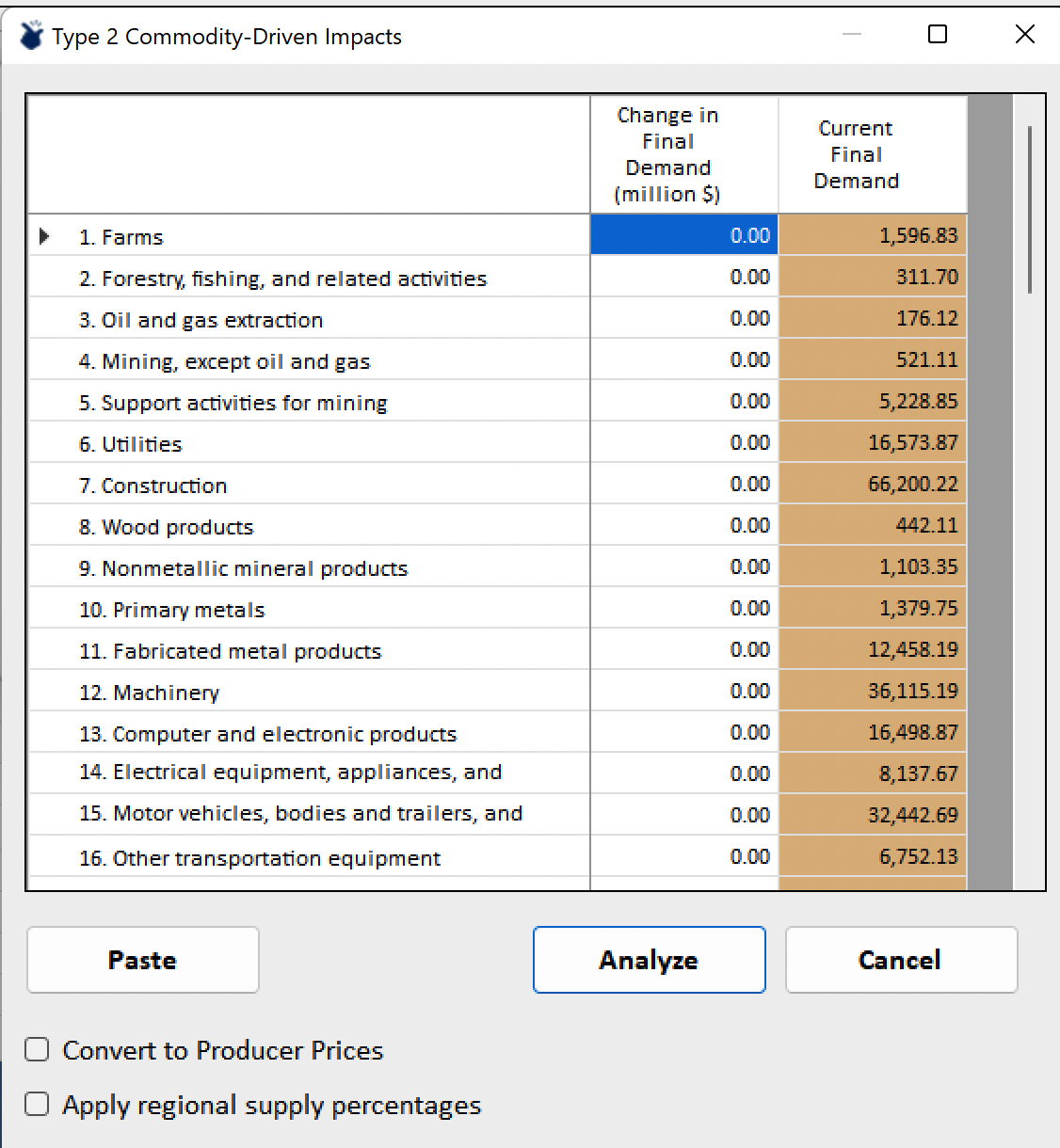 Final demands can be satisfied entirely by the region’s own industries or partly by imports. When we know that the impact will be satisfied entirely by regional industries, we leave the Apply Regional Supply Percentages unchecked. An example here would be when we know that a regional industry has received an order for a specified level of product to be delivered to another region.

However, when final demands increase generally and are expected to be satisfied by a mix of local production and imports, we use the regional supply percentages to moderate the impact on local producers (since they will be satisfying only some of the region’s demand). Regional supply percentages indicate, on average, how much of the demand for a commodity will be satisfied by local industry. 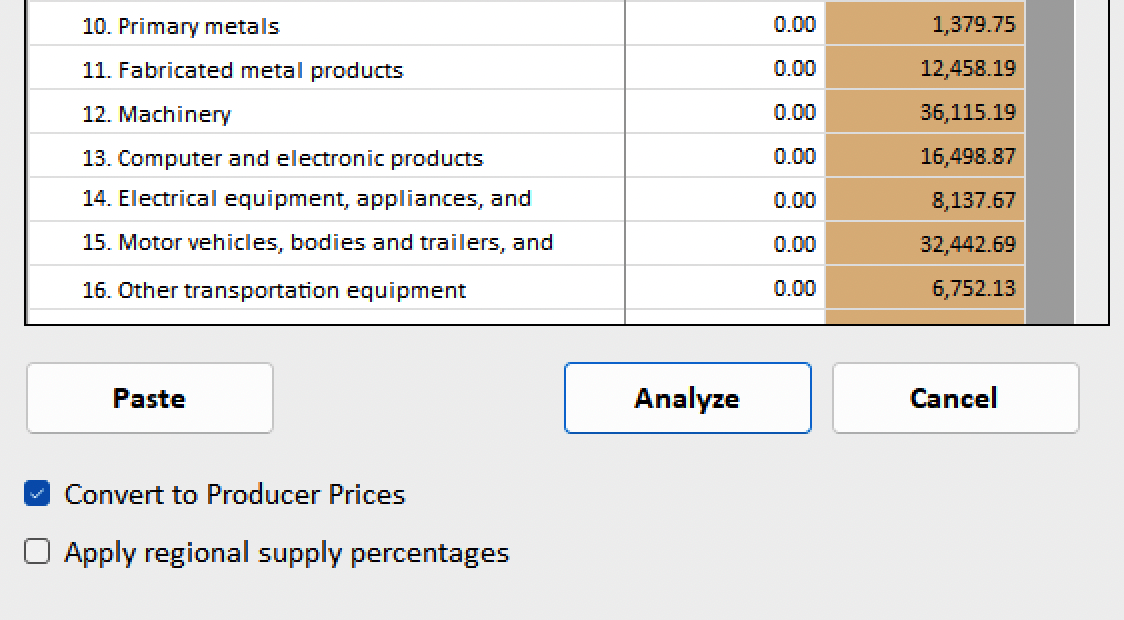 After entering the final demand shocks and clicking on Analyze, the results are displayed in a new window.

The first Results column reports the Final Demand Impacts entered by the user, or entered by the user and subsequently modified by the application of Regional Supply Percentages and or conversion from purchaser to producer prices. The next three columns report commodity output impacts, industry output impacts, and employment impacts, respectively. The differences between commodity and industry output impacts reflects the fact that commodities are produced by more than one industry – or restated, industries can produce more than one commodity. The final four columns report Employment Compensation, Tax, Gross Operating Surplus, and Total Value-Added impacts, respectively. Total Value-Added impacts are equal to the sum of the Employment Compensation, Tax, and Gross Operating Surplus impacts.